recently i have been on a 2 day long seminar about this new product from ibm. i have never been a mobile app developer, tried Objective C once but was not impressed… so i was expecting a lot from it… wondering that i might even make some app or two…

i am not gonna explain all technical details about this technology, but one picture shows the whole idea behind it: 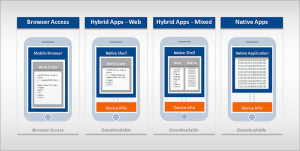 two phones in the middle are representing worklight. it basically is a native app that acts like customized browser that runs your javascript code + some native pieces, everything integrated together with device api for full control. idea behind it is that by exchanging the native code (from let’s say iphone for code designed for android) you can still keep the web-based part and app will run there as well… just in different design. neat. the browser-like downloadable app is prepared for you in few clicks. xml form with some javasript control can be written in minutes and in no time, you have your first functional app, or more like website that looks and acts like an native app… with transitions, shiny buttons and forms, pop-ups and everything.
after first day, we have made couple of demos and examples and i was fascinated! idea was really nice and simple, everithing was pre-made and looked sooo easy… (yeah we just made some basic stuff)
other day came and we started using native code and that is the point i revalidated my previous excitement. it was pretty messy to integrate native code snippets into web based “program”. soon i realized that in real app many native snippets will be needed due to performance issues, so in case you want a fast and reliable app, most of your code will be native anyway, and at some point there is no need for this slow and hard to debug web based part that actually is not that hard to rewrite in native code as well… yes, you have to rewrite it for each platform, but hey, it’s worth it… code is unified, much cleaner and easy to fix.
i must admit, if you are looking for app that will be quickly developed will be depolyed for at least two platforms and require just basic functionality and most of the computations can be done on server and atop of that you really like javascript and html5, Worklight is for you, otherwise make your research first, because it is probably not. don’t worry it was not for me either 😉
Facebook Comments
Facebook
Twitter
Google+
LinkedIn
IBM Worklight experience
Tagged on: computers    ibm worklight    mobile development    worklight